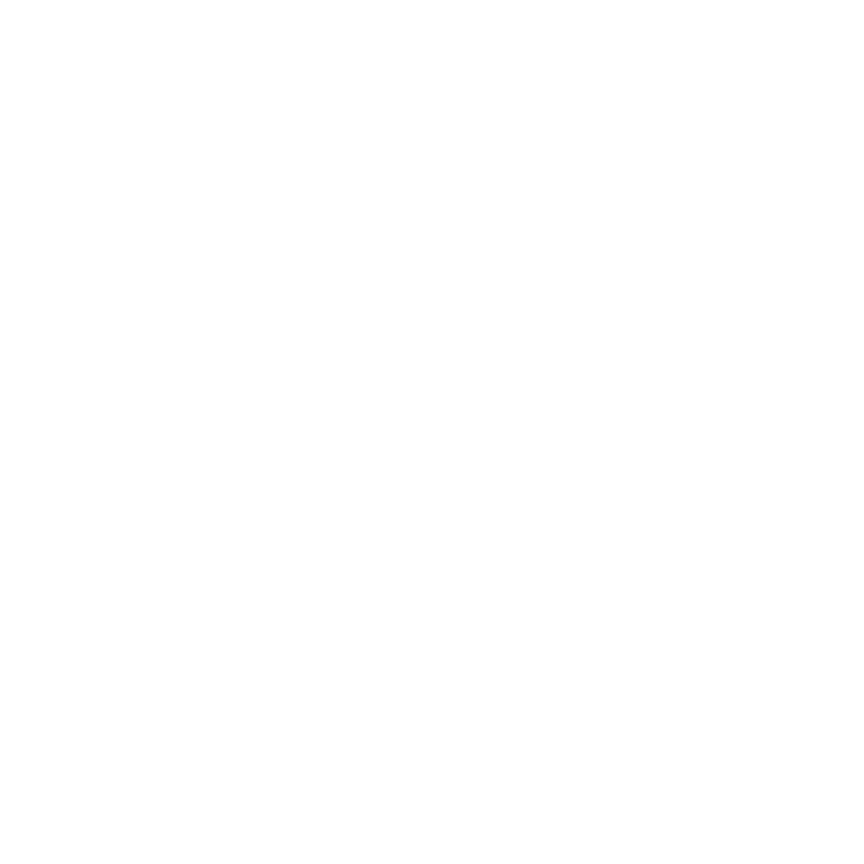 Mph club’s McLaren 720s Rental offers our discerning clients a truly special supercar that incorporates everything you would anticipate from this magnificent British automotive company.

McLaren brand long legacy of designing the most exquisite grand tourers has been consolidated in the 720s, which can be enjoyed as an unprecedented, hand-perfected, all-terrain, and all-triumphant car on the Miami roads!

With just a slight press of the start button, new life is breathed into the twin-turbo V8 and you’ll sense a swaying rumble that enkindles your spirit and captures your mind.

The McLaren 720s Coupe Rental is certainly the most competent grand tourer in its class and one of the most remarkable machines ever made. Its 4.0 liter dual-turbocharged V8 engine sits fiercely behind the driver and the passengers, making it incredibly capable on the track, producing 710 HP and 568 lb-ft of torque.

All of this vigor is expressed through an automatic transmission equipped with seven-speed dual-clutch mechanisms pegged to the rear wheels. Even though this automobile doesn’t have an all-wheel-drive arrangement, this McLaren 720s Supercar Rental accelerates from 0-60 mph in only 2.8 seconds — nothing short of pure monstrosity! What’s more, 100 mph is attained in just 5.5 seconds, which means a quarter-mile is commanded within 10.3 seconds.

With an astonishing top speed of 212 mph, this vehicle can give the drag racing specialist automobiles a run for their money. Innumerable hours have gone into developing its extraordinary chassis and packed with clever aerodynamic caliber, the McLaren 720s Rental becomes a stark track weapon. 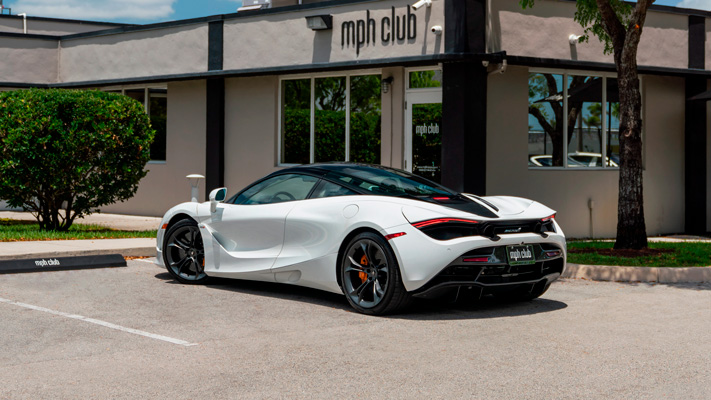 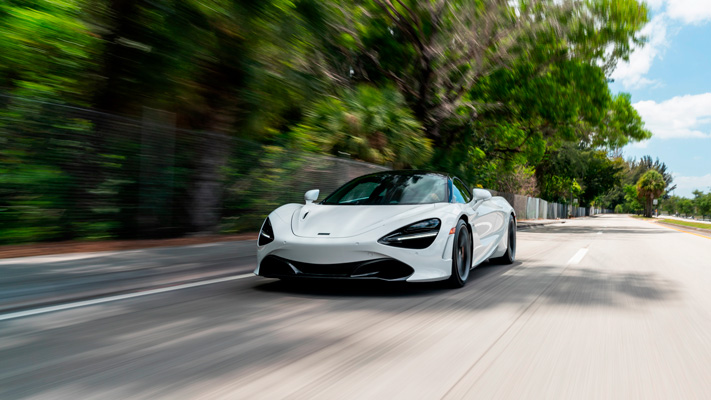 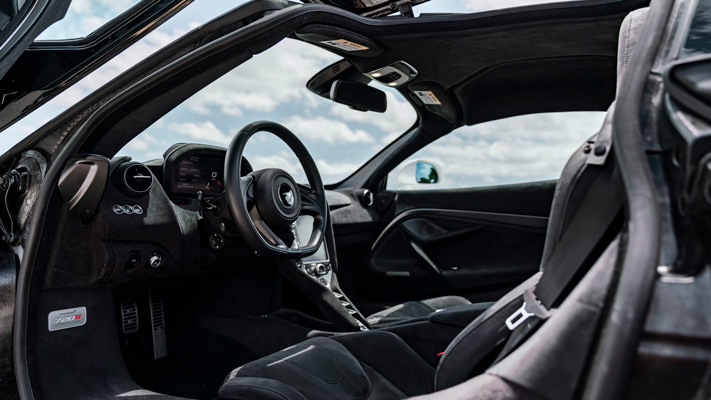 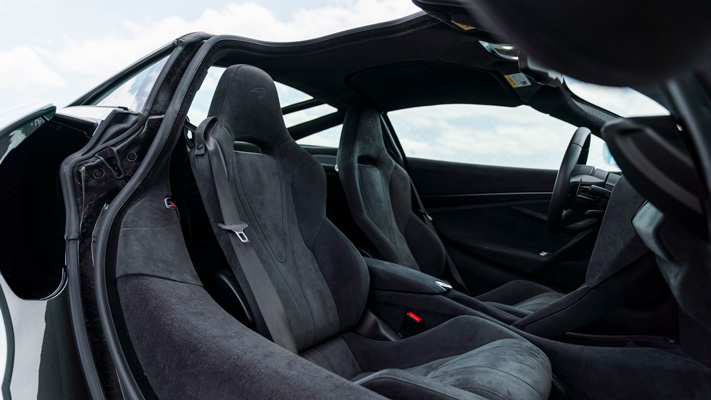 Before the 720S, McLaren was producing the 650s but eventually decided to stop production of that model in favor of the more recent one. So far, it seems like they made the right decision, as the 720s has proven to be one that is capable of generating a great deal of interest.

MORE ABOUT THE MCLAREN 720S RENTAL

Thanks to its phenomenal turbo engineering, this supercar rental is nearly entirely free of turbo lag. The throttle’s rejoinder is near-instantaneous which makes the revs climbing sensationally, with a stream of uninterrupted power jostling you in the back and involuntarily making you pop your eyes wide.

The boundless control that the carbon fiber offers, as well as the resourcefully intense aerodynamic components aid a low center of gravity. Razor-sharp on the wide roads, yet manageable in crowded traffics; the McLaren 720s Supercar Rental’s steering modus is electro-hydraulic, making it stunningly emotion-some.

Offering a range of feedback and interaction features that are now growing rare in other newer cars, this vehicle is responsively framed with good weight and steady equilibrium. With an incredible grip and the capacity to tighten your neck, which the 720s excels at, you feel like you’re a part of the car yourself.

The Variable Drift Control offered by it can hang the posterior of this car out on neighboring bends too, while the conventional carbon-ceramic brakes manage stoppages with ease and security when it’s time to back off.

Ultimately, despite all the racing aspects possessed by the McLaren 720s Rental, it hasn’t neglected the fact that it was made as a road car. Therefore, adaptive dampers are tailored as a usual standard, making this rental startlingly comfortable on the regular asphalt. Thus, unlocking this grand tourer’s full potential isn’t back-breaking!

The kernel of every  McLaren 720s Supercar Rental has a carbon-fiber tub that helps cut back on weight and secures sturdiness, all while protecting passengers. Inside its lightweight edifice is a two-seater cockpit that provisions the driver.

The interior design is supremely sporty, aesthetically touching, and its ostensible visibility is unique. Adorned with infotainment and connectivity mechanisms like an uprightly oriented 7.0-inch touchscreen that includes convenient features such as a four-speaker audio system, Bluetooth, and two USB ports, it’s heaven for those who want a dominant sound system to plunge the audio of this six-figure supercar’s twin-turbo engine.

The McLaren 720s Coupe Rental has an almost multilaterally ordered appearance, with tapered creases, eased edges, and a buoyant glasshouse. The hood details angular vents while the LED headlights have a perception of classy, timeless kohl around the fringes.

At the rear, a huge vent spans the breadth of the car, with the taillights deftly blended in. The twin-exit exhaust tops are also integrated into the vent for prominent functionality. A deployable rear spoiler lies above this, whereas an immense rear diffuser lies below.

The dazzling opening of doors is one of the most captivating design hallmarks of the McLaren 720s Coupe Rental. Like a geometrically sound piece of art, the dual-hinged dihedral doors roll up and forwards, to make entering and exiting as sleek as possible.

On the whole, a considerable raked flue draws air away from the front wheels that measure a functionally effective 19 inches in size!

Our McLaren 720s Rental has some outstanding supercar dimensions. A length of 178.9 inches and a breadth measuring 76 inches. The height is insanely low, at just 47.1 inches, which accounts for a low center of gravity for better maneuverability. On top of that, the wheelbase measures 105.1 inches, which further supports fancy steers.

By and large, this automobile embodies staggering looks and relentless velocity execution owing to its aerodynamic exterior.

With only a few McLaren 720s Supercars on the roads,  mph club can give you a unique car hire experience like no other!

Substantiating our unremitting quest to push the boundaries of possibility, our McLaren 720s Sportscar Rental is lighter, mightier, and durable. In fact, it is all of these and more.

Prepare to accelerate to the limits of what you always considered possible in a high-performance sports car.

All in all, if you’re looking to make a tremendous statement on the road and like riding a fervent, yet secure and dependable sports car; the McLaren 720s would prove to be the automobile of your dreams.

Allow yourself to revel in the experience of the splendor that comes with our McLaren 720s Rental and we promise you’ll cherish each second spent driving and touring in it. 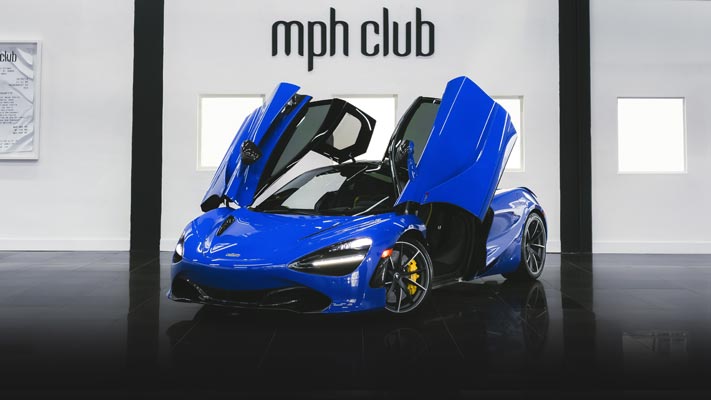 The Mclaren 720S will literally take your breath away. This is one of Mclaren’s top-of-the-line models and one of the fastest production vehicles ever assembled. 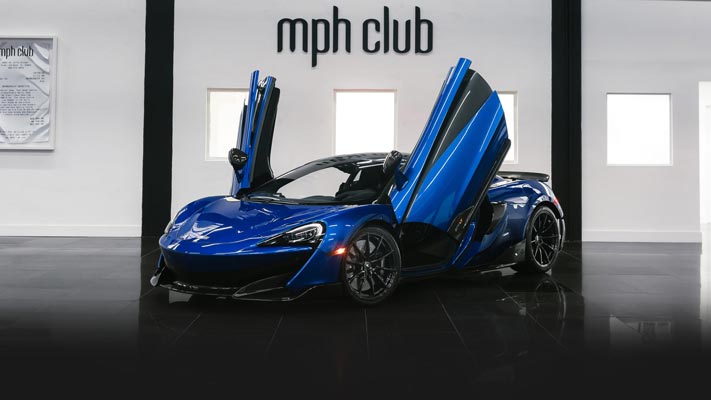 As if a 3.8L V8 engine wasn’t enough, McLaren threw in a twin-turbo. The 600LT spider was designed to dominate in a track setting, but we decided to let it loose on the streets. 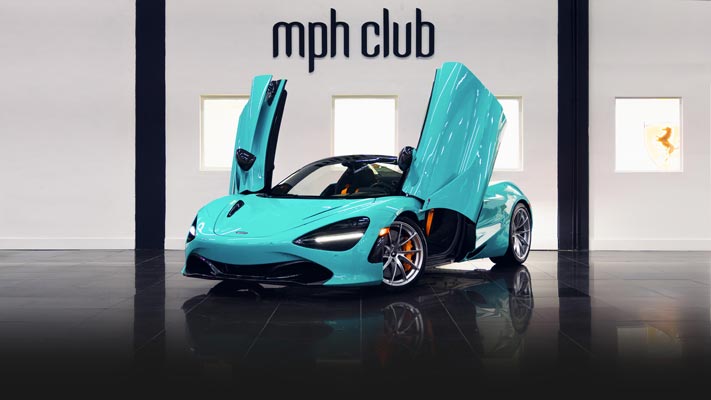 The McLaren 720S Spider is a high-performance sports car that was first introduced in 2017. It is the convertible version of the McLaren 720S, which is a coupe.