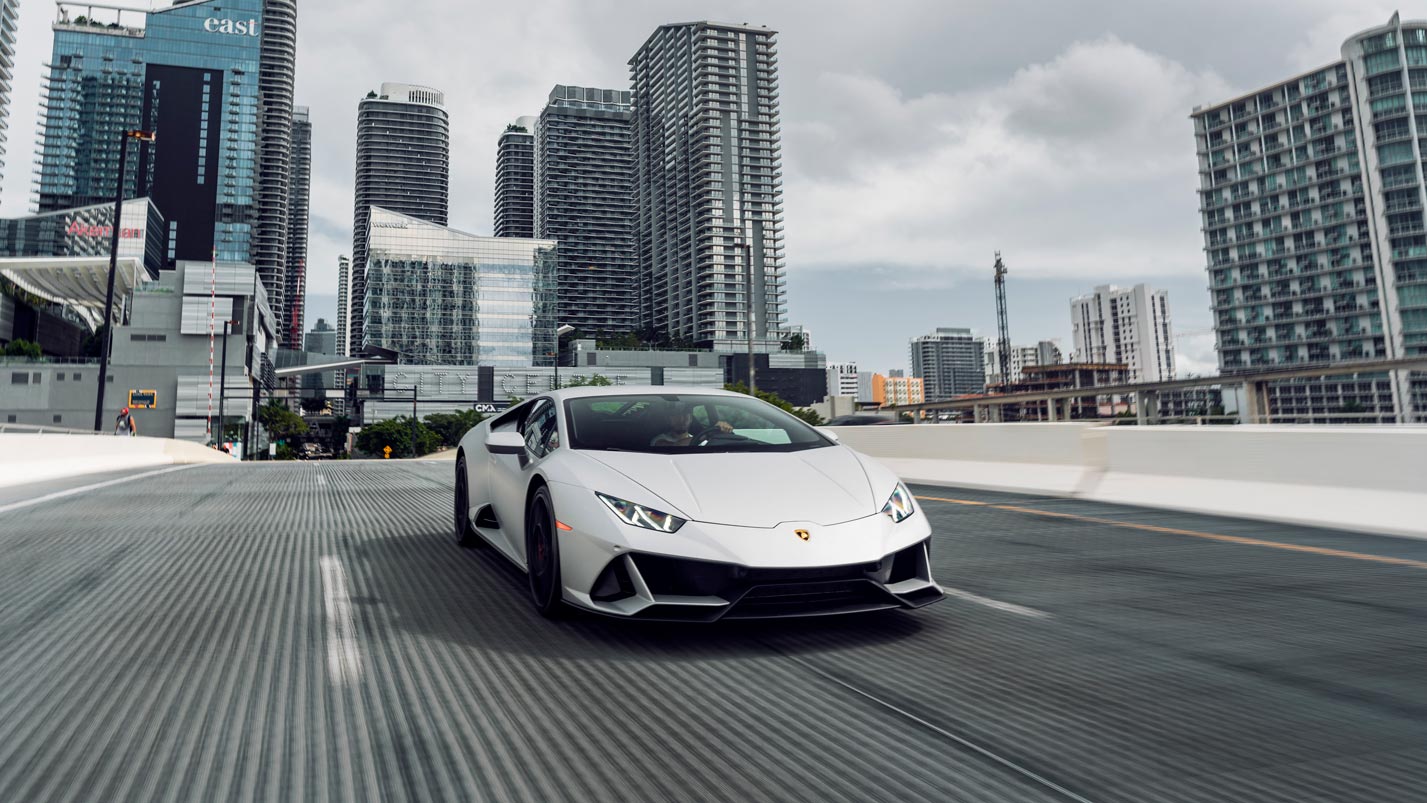 What’s up everybody! My name is Robert Rushing with mph Club, and we’re back with another review.

Today, we’ve got the Lamborghini Huracan Evo. This monster is the replacement to the Huracan base model and the end of the Performante.

This has all the features and qualities of what makes the Huracan incredible. It’s just been refined, upgraded. And today, we’re gonna dive into all the features, check out some of the specs, and do our best to explain how incredible it is to drive this car. 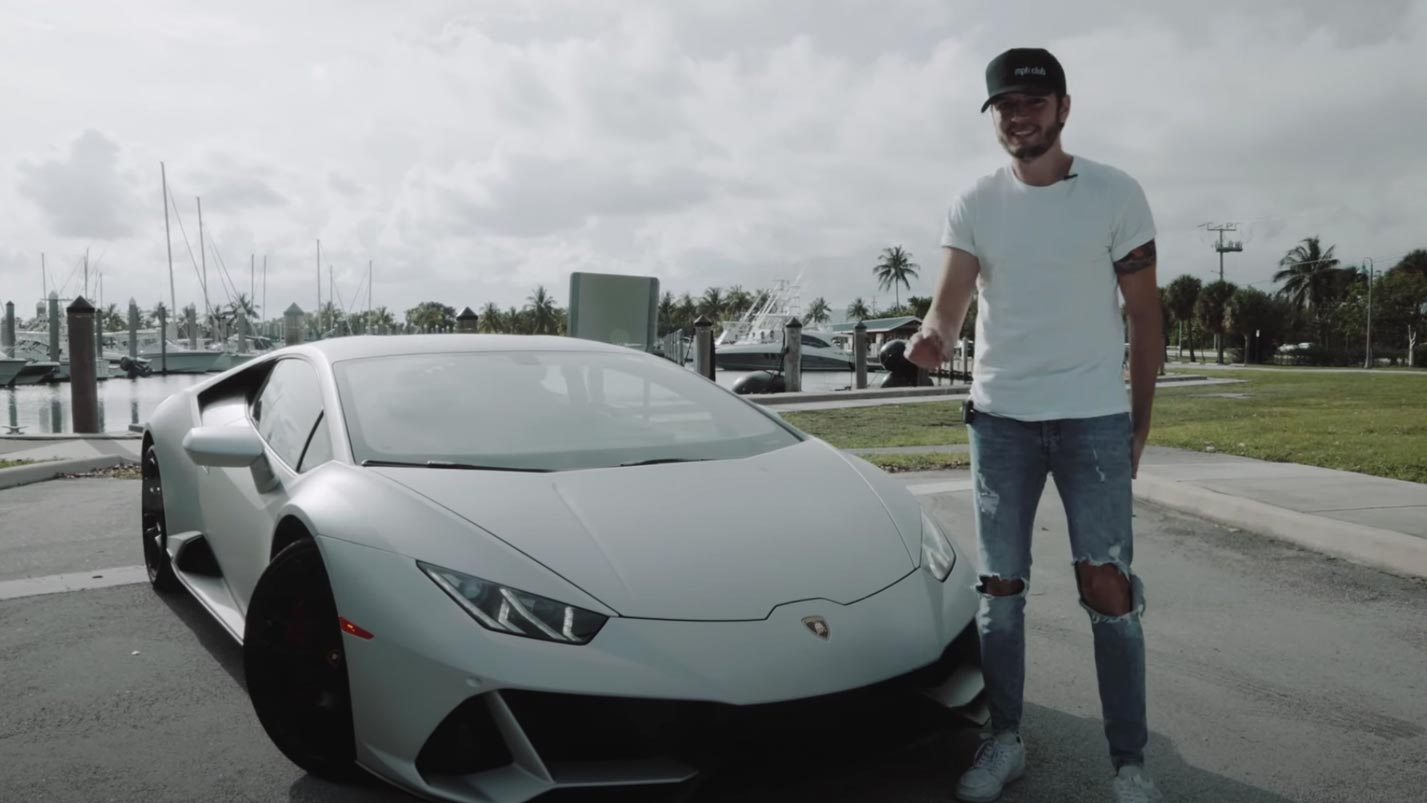 We’re gonna speak a little bit about the exterior of the Evo. There’s a few key design changes and one of the first you might notice is on the front splitter. Instead of the regular splitter, you have a new Lamborghini Y-styled splitter. This actually increases downforce.

You’ll also notice on the hood, you have these two in dents, and these are actually a design reminiscent of the Countach. It also has a little more aerodynamics.

You’ll see back here, this is a totally different side skirt vent. This is super similar to the Murcielago, so all these changes are really coming from Lamborghini designs in the past.

And, probably the most significant, as you might already know, is the exhaust system. 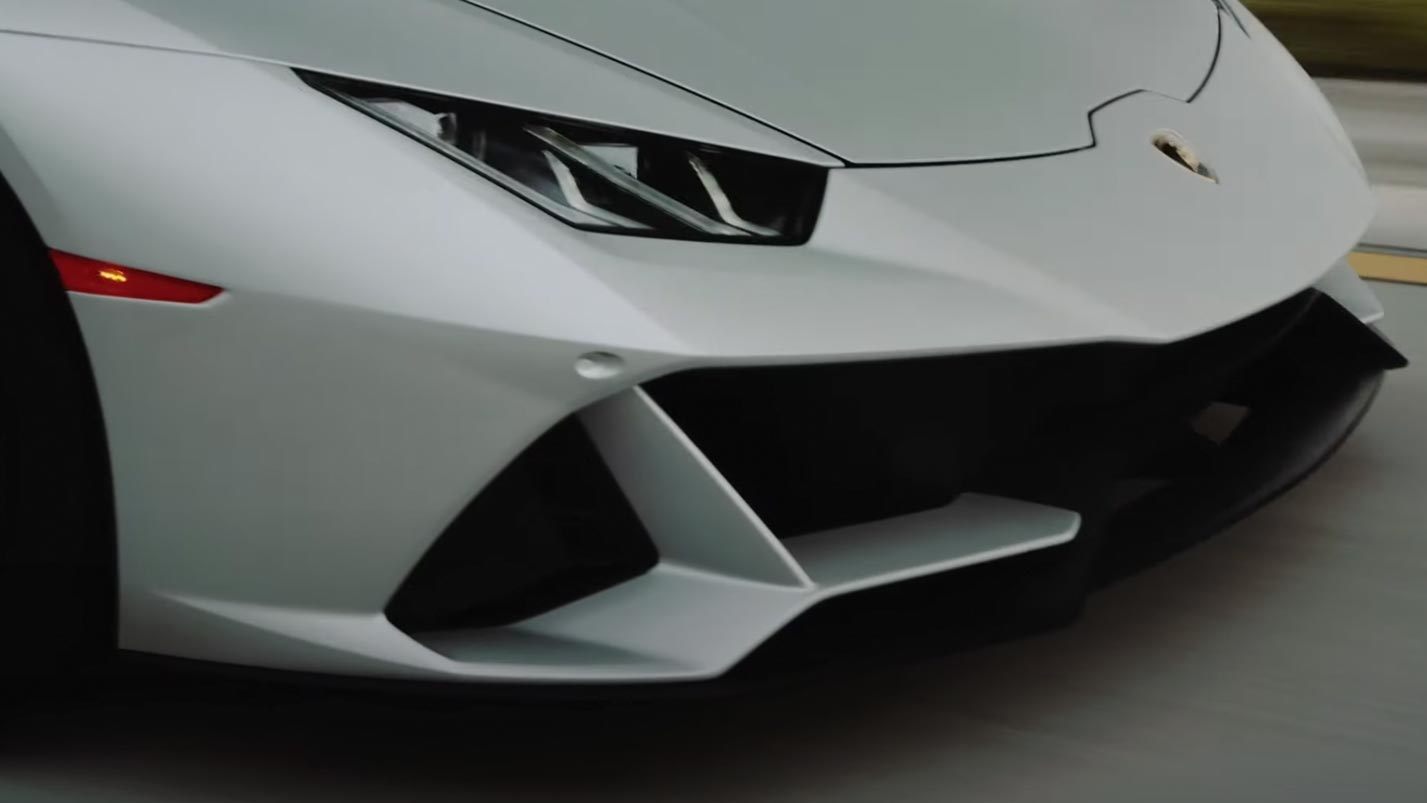 Okay, so, the main design difference in the back exhaust system is changing the valves from down here and lifting them up. This opens the rear diffuser to produce more downforce. This is a more efficient path for the exhaust system, and this design actually comes from Lamborghini models of bold.

So, it’s brand new yet classically Lamborghini, and probably what most people will recognize, the biggest difference from the Huracan to the evo.

So, all of these design changes have been to keep in mind performance and to amplify the everyday driving experience.

That’s exactly what this car is meant to do. It’s to take everything that makes the Lamborghini amazing and special and create the most comfortable daily driver you can out of an insane exotic car. 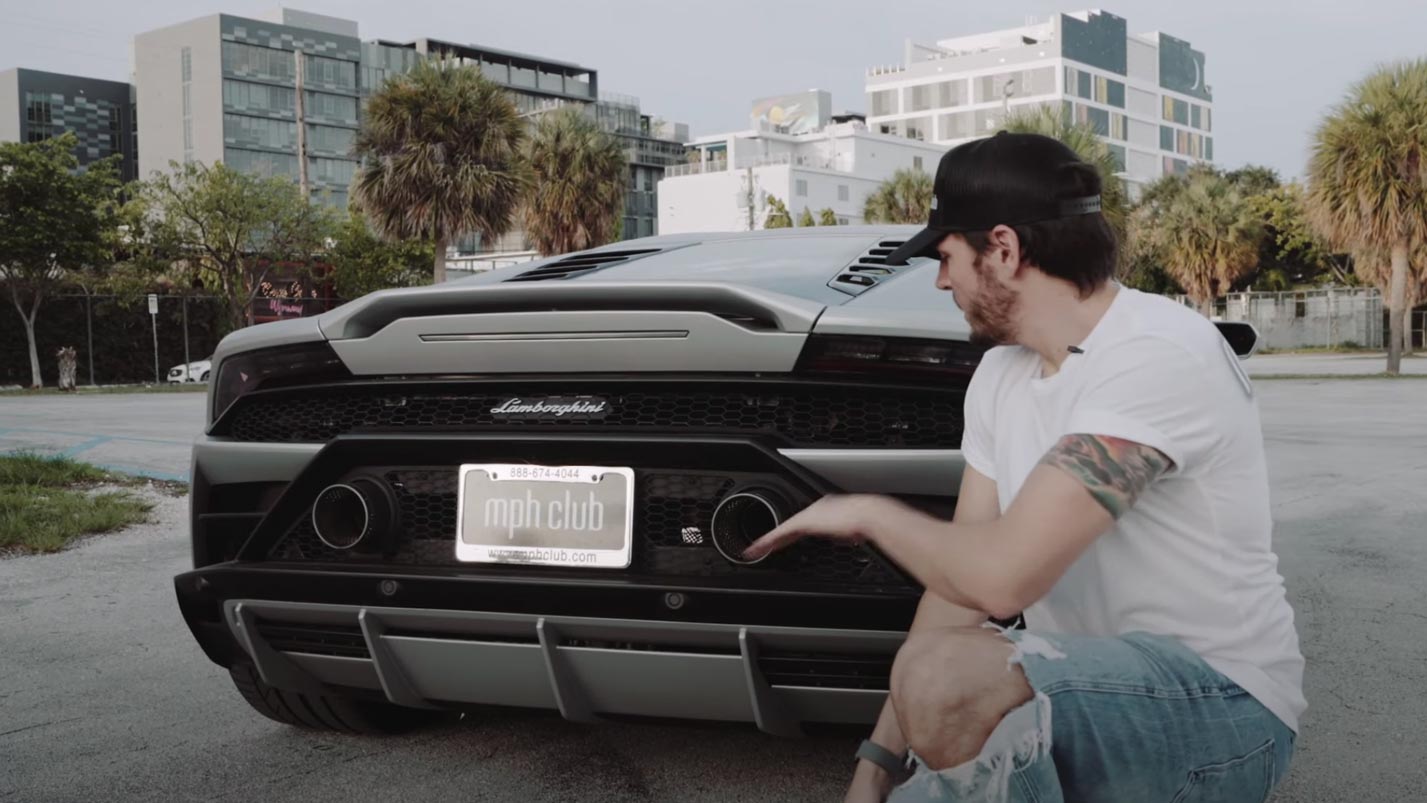 There’s something special about suspension systems in all top-of-the-line Lamborghini models, including the Evo.

So, suspended in your fluid are these magnetic particles which when an electromagnetic field is introduced, line up, and more fluid is allowed pass. That coupled with the double wishbone, creates an incredible suspension system and all of that is super technical and so easy, but, basically, magic magnets and that’s all you need to know. 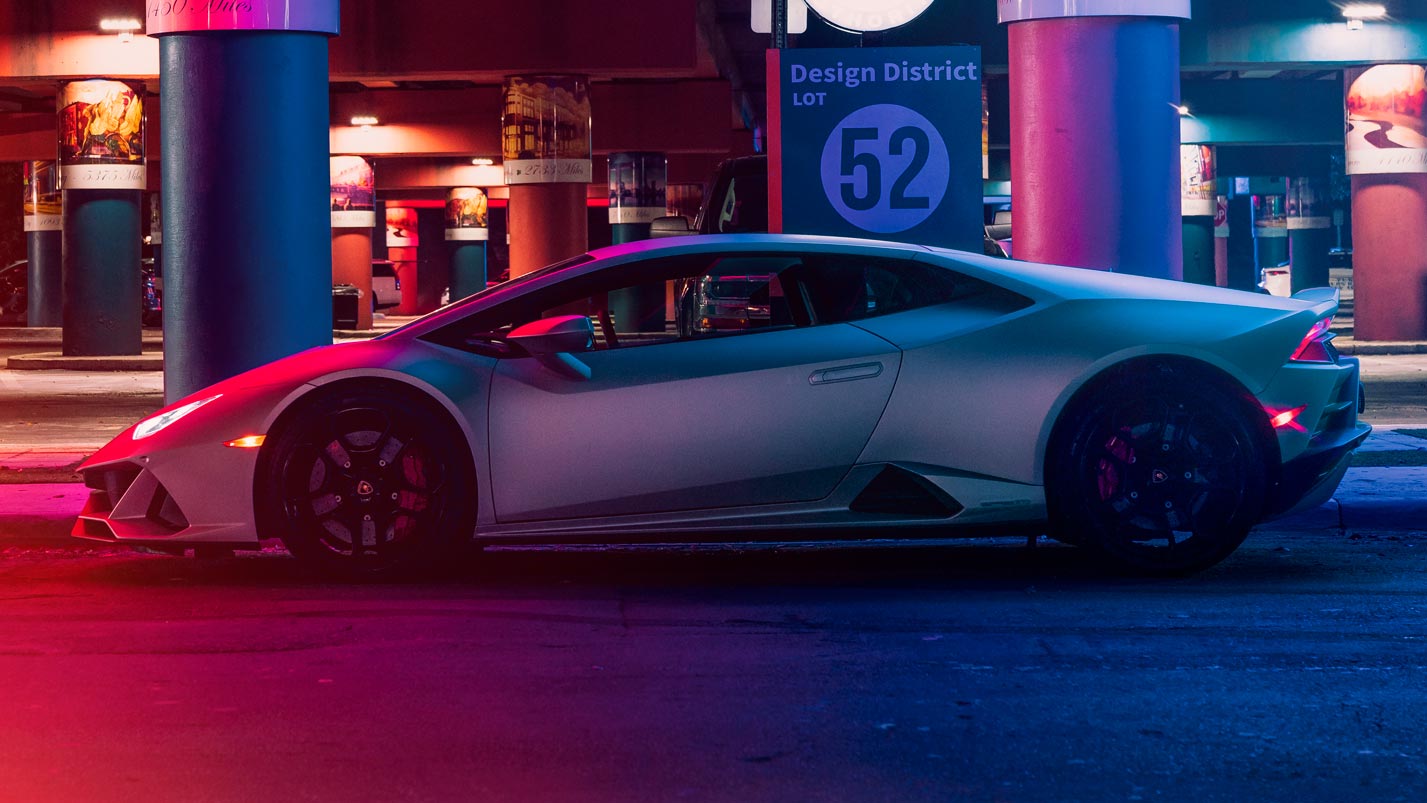 All right! So, now, we’re in the interior, which, at first, seems like a Huracan except for the giant elephant in the room–this 8.4-inch touchscreen infotainment system.

The Evo needed this really bad. So, we’ve been expecting the newest edition of the Huracan to have something similar to this. And Lamborghini outdid themselves!

This is super intuitive! This is the brand-new brain which interprets a lot of the different systems and moving parts to take in data from the driver and adjusts accordingly for an excellent everyday driving experience.

But, there is just so many awesome things about this touchscreen we’re gonna explore in a second.

This is the screen with the classic hexagonal design throughout all Lamborghini models. You have your AC controls here, which I need to turn on blast because it’s hot outside in Florida.

We have your heated and cooled seats, which is super cool! All of your Bluetooth and it’s not so invasive from the driving experience.

What’s really neat is while you’re driving and you want to adjust the volume, you don’t have to go through the different folders and like distract yourself.

It’s a two-finger design where you can just hold two fingers, and it’ll scroll up and down the volume for you. 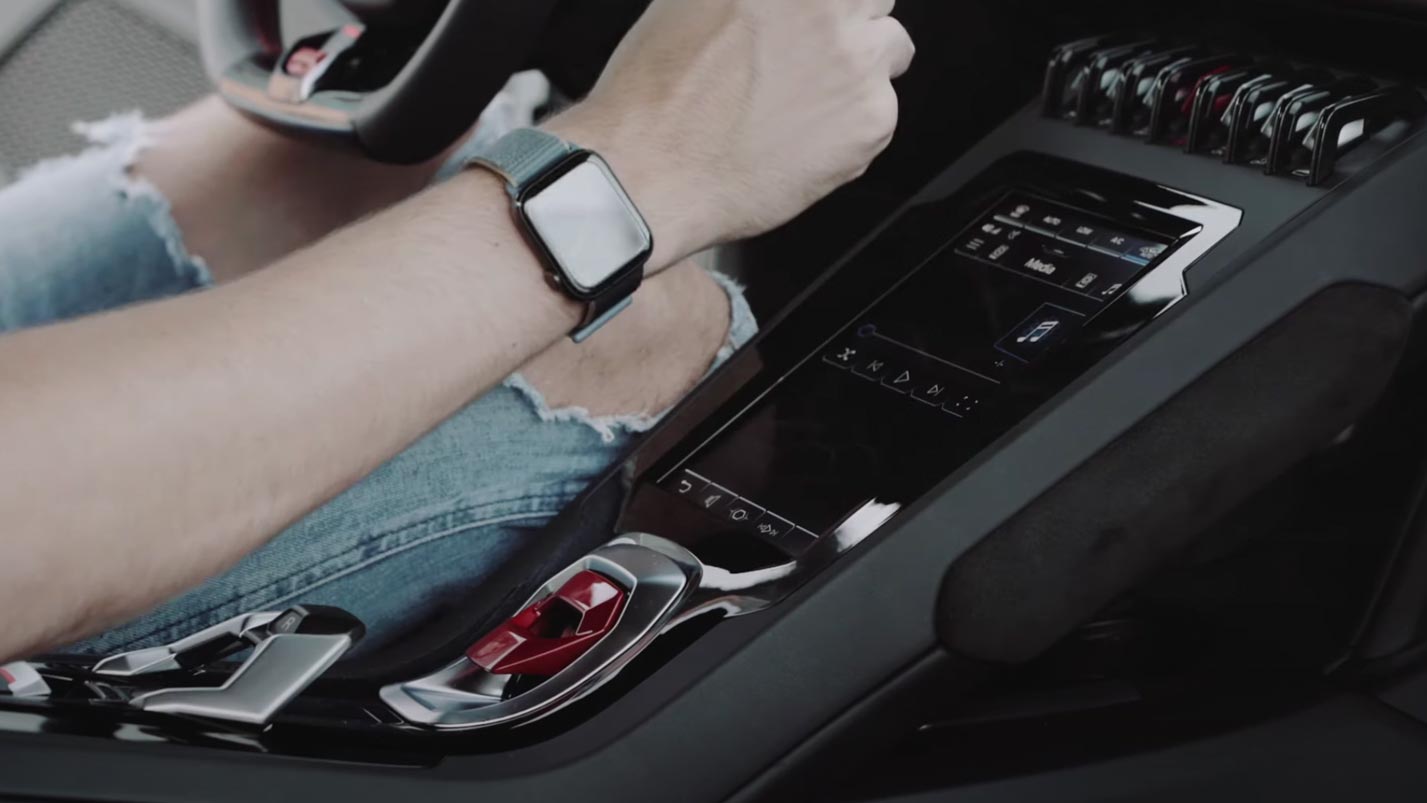 Everything you need is right here and it’s not too difficult. There’s nothing hidden in the menus, which is refreshing compared to some of the other exotic supercars that we rent. Some cars have the liftgate buried somewhere in the menu and it takes a lot for people to find.

We sometimes get calls at night trying to ask how to lift the car up a couple of inches and like the McLaren’s, for example, really have a hitting.

Anyway, this new system is awesome, simple, simplistic, clean, and classically Lamborghini. You also have, basically, everything else super similar to the Huracan. All of your features here, you have your windows, your hazards, a lift gate to lift the front of the car over bumps. I believe this liftgate actually goes up for about three inches so you can clear anything.

We also have, right here, a cup holder, which is super slick. That’s cool! That’s really cool! It’s up and you. Just push it right back in when you don’t have the drink. There’s no storage space, but it’s a Lamborghini. You’re not looking for storage space. There never has been unless you’re in a Urus. But, the Huracan has just the shelf here, which, similar to the Aventador, it can fit like a small briefcase or maybe a backpack if you crush it. But yeah, not a ton of storage space, but that doesn’t matter. You’re in an incredible Lamborghini. We can’t ignore it! 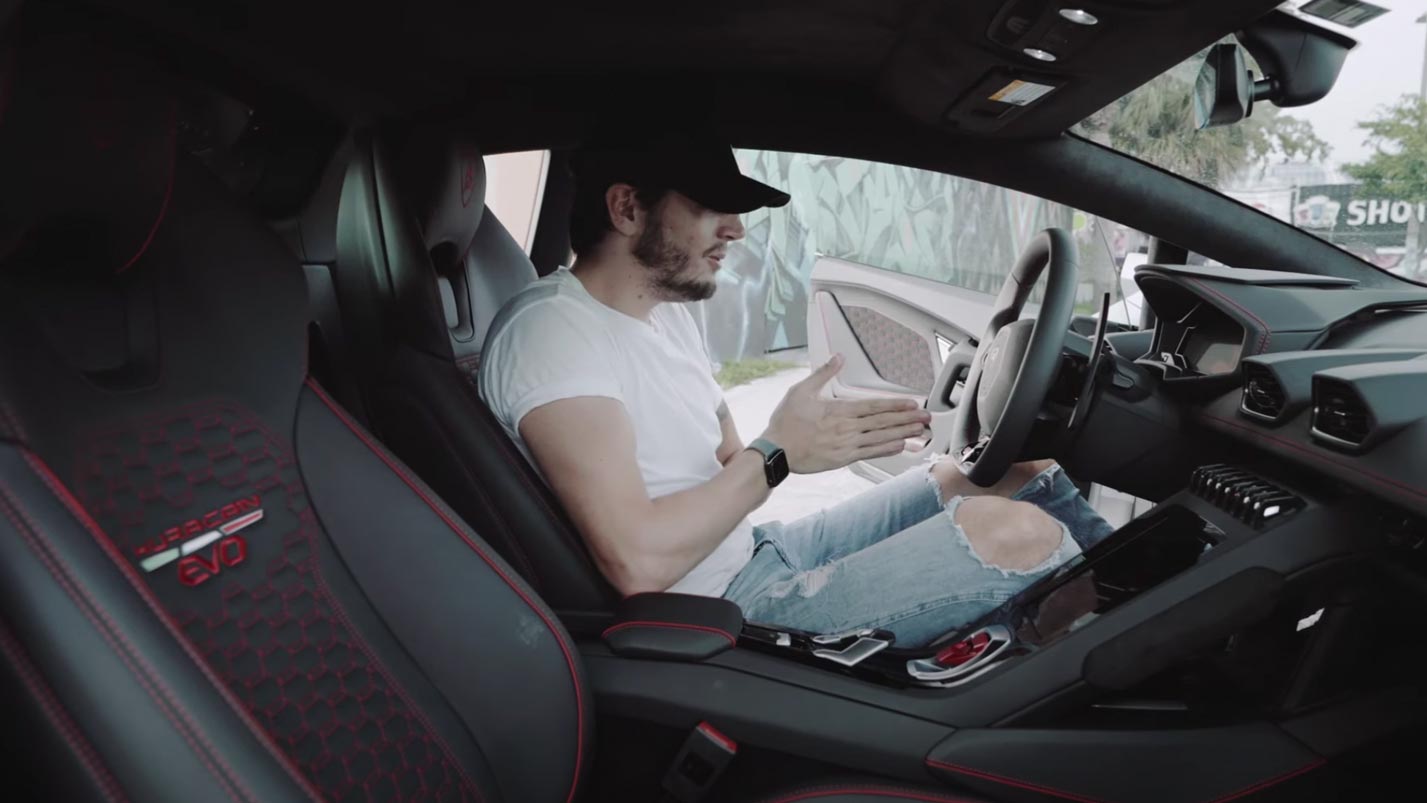 This incredible red stitching throughout the bucket seat racing chairs. We have Huracan Evo stitched here at the Italian colors throughout the whole interior. As you can see, this is super premium. You also have a super small sun blocker with an even smaller mirror. That’s mine.

The whole experience is to drive. The reason you’re getting this is to drive in the same car. The whole thing is super driver focused and it shows.

You have two USB ports, so you can charge a cigarette lighter. Right here, a little armrest piece, your parking brake. This is how you pull it up for reverse. People have driven Lamborghinis are super used to seeing this is in a lot of the other models, as well a button to fit yourself and park, a button to lock in the manual, your iconic start and stop button with the red lifts. 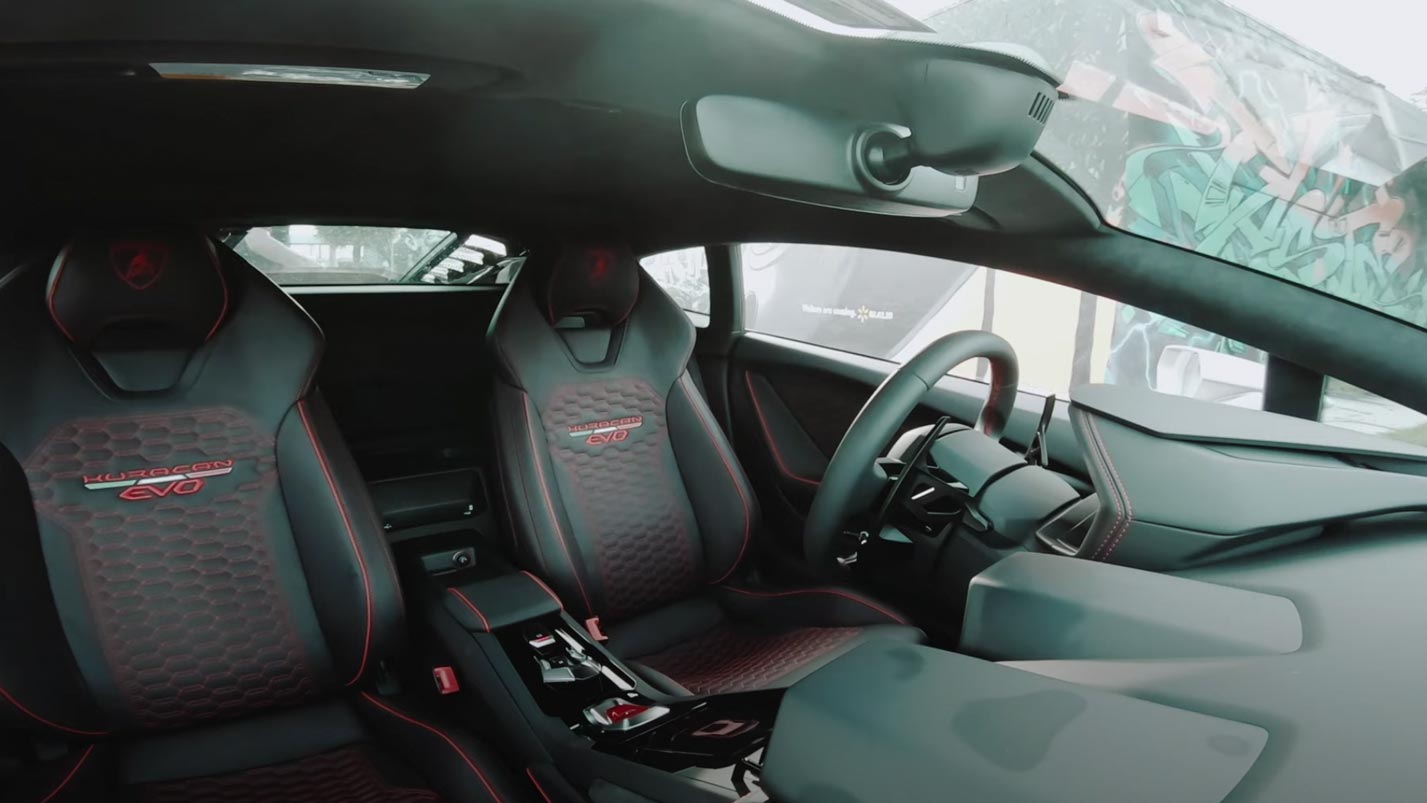 Now, other than, like all of these features, it’s the Huracan, but Lamborghini has made the Evo an amplified everyday driving experience. And, I have to agree everything that’s different from the Huracan to this is significant needed and well appreciated.

Okay, the infamous Lamborghini v10 5.2-liter engine kicking out 640 horsepower, 420 pound-feet of torque, the rev meter going all the way up to 8,000 just screaming Banshee out of hell.

This thing is insane. We’re going to test this car, but we’re gonna treat it respectfully. We’re gonna be really nice to the car, and we’re just going to do that!

I like how refined this is. You can hear me crystal-clear. That’s because the engine isn’t really loud in your face like the Aventador is.

This is comfortable. You can daily, this car. I could drive this mph club every day if he’s perfectly happy.

Alright guys! Thanks for reading our review. We love the Evo! This is an incredible car, and if you are ever in Miami and need to rent an exotic vehicle, come at mph club.

Contact us now at 888-674-4044 to reserve your Lamborghini Huracan Evo and visit our YouTube channel for more videos of our most recent exotic and luxury car reviews.